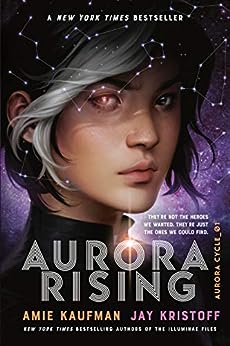 By Amie Kaufman and Jay Kristoff

In the year 2380, cadets graduating from Aurora Academy are getting placed on missions throughout the galaxy. Tyler Jones is ready to captain the perfect squad, but an error on his part forces him to take over a motley crew consisting of a sociopath, a tech wiz, an angry alien warrior, a punk pilot, and an arrogant diplomat. But, they aren’t his biggest worry. The girl he saved from being trapped in cryo-sleep for two centuries– and the reason why he is captaining a group of misfits– is now part of the crew and might be the catalyst to a war that’s been brewing. To Tyler’s surprise, his crew may be the galaxies’ last hope.

What Goes Up by Katie Kennedy